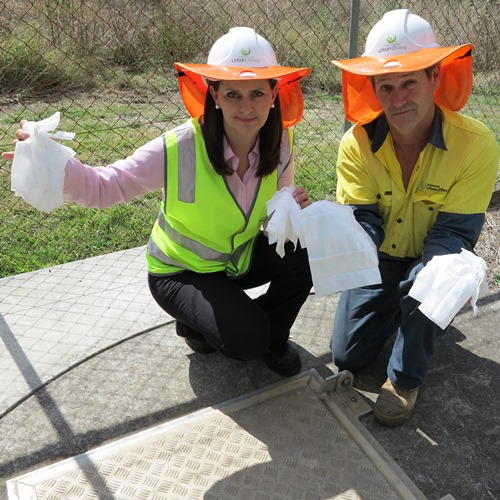 Queensland Urban Utilities spokesperson, Michelle Cull, said scientists were using the one-of-a-kind facility to study how wipes break down in the sewer network.

“Wipes don’t disintegrate quickly like toilet paper and can cause blockages not only in your household plumbing but our sewer network,” she said.

“Creating a new National Standard will lead to clearer labelling and give consumers confidence that they’re only flushing products which will break down after they’re flushed.

“Until then, the best advice is to only flush the Three Ps – pee, poo and (toilet) paper.”

Last year, we removed around 120 tonnes of wet wipes – which is the equivalent of 34 hippos – from the sewer network.

Queensland Urban Utilities sits on the Water Services Association of Australia (WSAA) Standards Committee, which is hoping to have the new National Standard finalised by the end of this year to replace industry self-regulation.

The National Standard will cover the ‘flushability’ of not just wipes, but other disposable products such as tampons, cotton buds, kitty litter, paper towels and single-use toothbrushes.