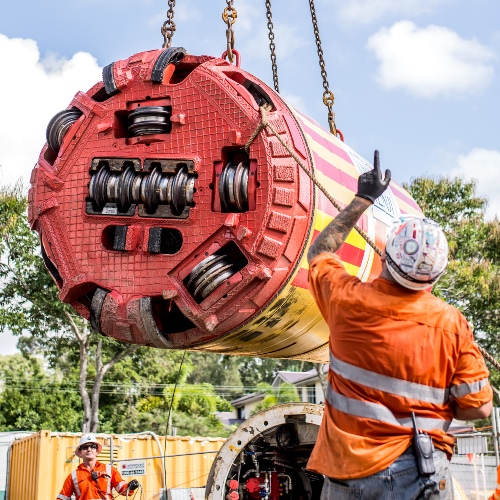 Queensland Urban Utilities is inviting residents to a community celebration to mark the completion of the new Kenmore Jindalee cross-river pipeline next Sunday, March 31.

In a feat of engineering, two new pipes – one for water and one for sewerage – were laid inside a tunnel 10 metres beneath the Brisbane River.

An additional two kilometres of new sewer pipes and over 500 metres of new water pipes were also installed on the Jindalee side of the river.

“These new pipes mean the water and sewerage network will be able to cope with the extra toilets flushing and taps running as the western suburbs continue to grow,” she said.

“This was a big project so we involved the community along the way, including local primary school students who designed and named the tunnel borer ‘Kenji’ by merging the names of Kenmore and Jindalee.

“Queensland Urban Utilities wants to thank local residents for their patience during this important upgrade by inviting them to a free community celebration.”

The event will be held from 8am to 10am on Sunday, March 31 at the Jindalee Scout Den, which was the exit point for the tunnel borer after it travelled beneath the Brisbane River from Kenmore.

The celebrations – which are free for the public – will include face painting, a coffee cart and a BBQ. There will be plenty of family-friendly entertainment, with a wildlife experience courtesy of Geckoes Wildlife, live music by the Gentle Persons Club and a special appearance by the Water Warriors.