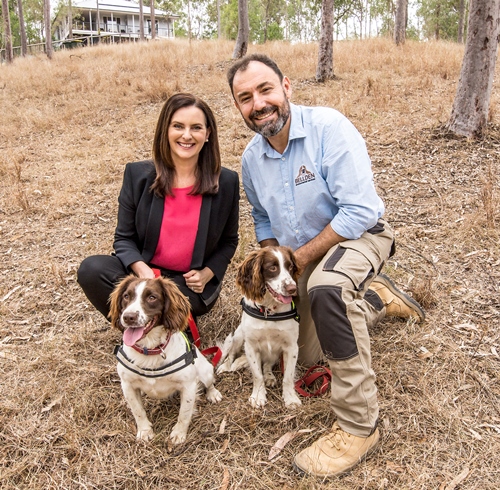 In a Queensland first, two four-legged furry recruits will be used by Queensland Urban Utilities to sniff out hidden underground water leaks.

Springer spaniels Halo and Danny graduated today after more than eight months of rigorous training and are now ready to get down to business.

“We have more than 9,000 kilometres of water pipes in our network and some of these pipes are located in dense bushland, so it can be difficult to detect a leak,” she said.

“Halo and Danny are trained to sniff out the chlorine in potable water and are particularly effective in bushland, where it can be difficult for us to access.”

The dogs are an additional measure to track down leaks, alongside technology already in use such as listening devices and sensors.

“What makes Halo and Danny so impressive is that they are able to differentiate between water leaking from a pipe underground and all other types of water on the surface.

“Once the dogs detect a potential leak, we will send our field crews to further investigate and repair it.”

The dogs were first trained by Steve Austin in Sydney, who has been training dogs for over 30 years for a range of situations including narcotics and bomb detection.

They then moved into the care of handler Dennis Gannaway who taught them how to use their new skills in the real world and work as a team from his Mount Crosby property.

“These dogs are working-line springer spaniels and they were chosen because they love to hunt,” said Mr Gannaway.

“They are trained to drop their noses to the ground when they find the leak and then are rewarded with a game of catch.

“They can usually detect a leak from a few metres away. If it is a big leak, they might pick it up from 30 to 40 metres away and track back to where the scent is the strongest.”

Halo and Danny will now take part in a number of trials across the Queensland Urban Utilities service region, which covers Brisbane, Ipswich, Scenic Rim, Lockyer Valley and Somerset.