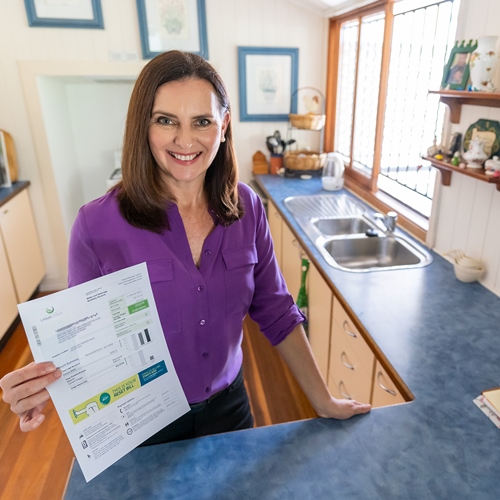 Queensland Urban Utilities is making it simpler for Lockyer Valley and Somerset customers to track their water usage and detect leaks sooner, enabling them to save water and money.

Under the new ‘Simpler Billing’ initiative, bills will be issued days – not weeks – after meter readings, reducing the risk that hidden underground leaks will go undetected.

Also for the first time, all of the charges on the bill – the water usage and service charges – will be for the same period, in arrears. Previously, service charges were billed in advance.

“By issuing bills within days of the meter being read, customers will be able to better track their water usage and detect concealed underground leakers earlier,” she said.

“This will not only help save water but reduce the risk of ‘bill shock’, the unwanted surprise you get when a leak goes undiscovered for long periods.

“Our customers told us they wanted bills that were easier to understand and were issued soon after their meter was read. We listened to their feedback, and that’s why we are making bills simpler.”

As part of the transition to ‘Simpler Billing’, the next quarterly bill customers receive will be a once-off Reset Bill, which will cover the cost of water used up to that date.

Importantly, all customers will continue to pay the same price per kilolitre for water in 2018/19.

After the once-off Reset Bill in May or June, customers will receive their first new-look ‘Simpler Bill’ from early October onwards. Bills will continue to be issued on a quarterly basis.

Customers will receive a letter from us in the next week or two detailing what the change means for them.

If anyone experiences any difficulty paying their bill, we’d encourage them to get in touch with us, as we offer flexible payment arrangements or extensions.